The pristine white Eleiko leather belt is perhaps one of the most well-known belts on weightlifting platforms, therefore we were eager to check it out when we got ours. Because it is a weightlifting belt, I put it through its paces with the power clean, front squat, back squat, and deadlift. In addition, I utilized it for low-bar squats to test if strength athletes might use it in other sports.

This belt is firm, giving it a strong sense of security. This leather belt seemed a little stiffer than previous leather belts. For a weightlifter, the additional hard feel of this belt is ideal. Excessive forward lean is a common cause of failure or missed lifts in weightlifting. When I was lifting, the hard structure of this belt helped me fight forward feelings. The two-pronged clasp was also a favorite of mine since it held my abdomen snugly and securely. The two-pronged clasp helps compensate for the lack of thickness in the front of this belt, which is skinnier than the back.

With this belt, I never felt restricted in my range of motion when performing Olympic lifts. With the tougher leather, I was able to move about freely while being steady. In this belt, the clean and front squat felt fantastic. The broader back prevented me from leaning forward and helped me maintain a tall and long posture.

Because this is a weightlifting belt, I also tried it with a low-bar squat to see whether other strength athletes could use it. Even though it is not as thick as conventional powerlifting belts, I loved how this belt kept me steady during low-bar squats. This, I believe, is due to the inflexible construction of the belt. One aspect of the leather’s sensation on the body that may deter some lifters is how it feels on the body. It is firmer, so it takes a little longer to break in and may cause some rib pain during the first few usages.

This belt was both hot and chilly in terms of comfort. The belt’s size appealed to me; it is 10cm in the back with an extra cushion. That’s nearly four inches thick, with a 2.5-inch pad running across the back. When tightening the belt exceedingly tight, this pad felt nice on the back. I enjoyed how the belt allowed me to move about easily. Limited ranges of motion were never an issue, making this belt a comfortable fit in a variety of lifts.

Another great feature was the leather strap’s overlap under the two-pronged buckle. This resulted in a lack of pinching and a metallic sensation on the skin. The supple inside of the leather also helped to prevent excessive rubbing friction. The hard leather on the top and bottom of the belt made me feel a bit uneasy at first, and it did pinch my ribs.

Also, for people who like to lift without clothing, this belt might not be the best option. Until the fresh leather is broken in, they may suffer some chafing and pinching.

This belt is made of genuine leather and is somewhat stiffer than other leather belts. When bent, there is not much give, which may or may not be a good thing depending on your belt tastes. The fact that the inside of the leather is a little softer than the outside appealed to me. This gave it a soft but robust feel, which is something that many belts struggle with. The white leather added a nice touch to the belt, making it seem extremely clean and recognized.

While the white leather offered the belt a clean appearance, it came with a problem. You may notice some shedding of the belt during the first few usages. This is true of all leather belts, but the white leather helps it stand out a bit more. The metal buckle with two prongs was a big plus. The metal is well-made and not too thin, which can give buckles a cheap appearance.

This belt appears to be quite durable. It had heavy double stitching around the outside, which I appreciated. This made it seem more compact, and it will save the outsides from fraying prematurely. There are two loops and four hefty metal connectors on the buckle. I do not see any risk of the buckle failing under heavy loads, as other belts may.

While this belt is tough, breaking it in might be a pain. Someone who desires a belt that is incredibly comfy straight away may want a different belt. 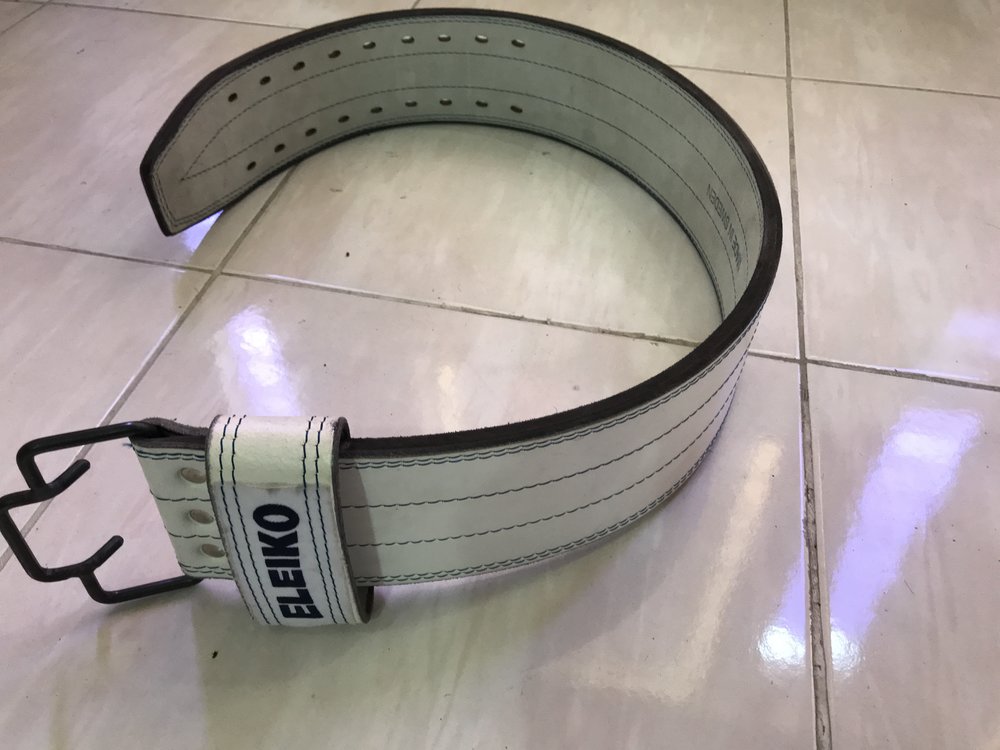 This belt starts at $49.00, which is on the higher end of the pricing range for this kind of belt. This belt is more expensive, but it is well-made and designed for Olympic lifting. I believe the pricing is extremely reasonable for athletes searching for a belt that is meant to help weightlifting. On the other hand, a recreational lifter who employs a belt for general lifting reasons may discover better, less expensive solutions.

This belt holds the torso tight and never impedes range of motion, whether in weightlifting or powerlifting. Furthermore, the heavy metal clasp and strong leather gave the feeling that this belt would last a long time. This belt may not be the greatest choice for someone who wants a belt for general lifting activities because the price is a little excessive. Boxing Shoes vs Wrestling Shoes: What Is the Difference? Team Musclerig - November 19, 2021
0
If you exercise often and want to improve your general fitness, power racks can help because they allow you to store all of your...

Team Musclerig - November 16, 2021
0
The power tower or pull up and dip station, in my view, is one of the greatest fitness equipment you can have at home....

Team Musclerig - November 10, 2021
0
This guide about calisthenics for heavy guys talks about the most important things to think about before beginning calisthenics. It also includes a list...

Team Musclerig - June 24, 2021
0
Everything you need to know about elliptical and stairmaster machines and how they differentiate from each other. Let's learn all about the nitty-gritty details...