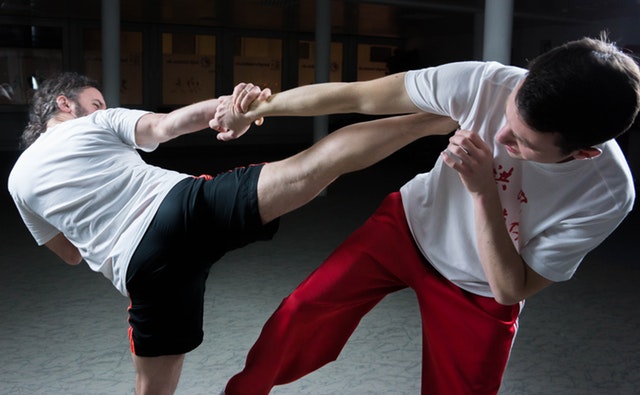 When we were smaller we all wanted to learn Kung Fu. Those fights in the Hollywood movies and the style to do them were just so captivating to us that we all wanted to be like those heroes that were able to hit tens of people, all at once without breaking a muscle.

Well there is good news for you. Even if you have become older, even if you can’t go to the gym on a regular basis, or can’t hire a martial arts trainer to train you in the art of shaolin warriors, you can still learn the art of wushu martial arts, all by yourself.

What you will have to do is to learn Kung Fu self defense by reading books, practicing those books on a regular basis through punching dummies and bags, and other home gym equipment and you will be good to go.

Best Kung Fu Books to Learn its History and Techniques:

Kung Fu is an old martial arts form. It is being used for self defense now but in the initial days it was a discipline for self control and a way to live. Shaolin monks used to train in this art and they are some of the most resilient people on earth.

Here are some of the top-rated Kung Fu books from Amazon. We have selected these books because of their ratings, the quality of information available in them, and the reviews they have garnered.

So, here you go: Best Books to Learn about the history of Kungfu.

Written in the 1980s by David Chow, the martial art’s history and philosophy book examines the art of Kungfu and its treatment in recent films.

Reviewers have said that it contains all relevant information that you will need to learn about the history of Kungfu. Others have said that it also sheds light on the aspects of chinese martial form such as running like a cheetah, and putting out a candle with your eyes – even we didn’t know that was possible, but you can learn it from this book.

2. The Tao of Wing Chun: The History and Principles of Chinas Most Explosive Martial Art

John Little and Danny Xuan explain in detail how Wing Chun martial arts was made on the laws of physics, human nature and bio-mechanics. The martial arts was designed with efficiency, productivity, and economy in mind. In Wing Chun, a person doesn’t focuses on the size of the person and his power, but ones own body structure and mechanics to defeat the opponent.

We have catered a list of the best books to learn chinese wrestling that you can take anywhere to get accustomed to this art form. It will be an inspiration for you so that you can start training and get better at martial arts.

Materialized by Wang Lang, the art of Mantis Kung Fu is not just a system of martial arts but a way of life. The book of praying mantis focuses on providing methods of self-defense, offense, and strength. The system is pretty old, at least 300 years ago, but Stuart Olson has tried to keep it alive by authoring such a glogrious book that focuses on its swift moves and fighting style.

The Complete Guide to Northern Praying Mantis Kung Fu provides an in-depth look at the history and practice of this remarkable martial art. It is a great book to learn about Kung fu that you can read while practicing martial arts at home.

Bubishi: The Classic Manual of Combat

The Bubishi is a Chinese manual for combat and strategy. It specially focuses on the philosophy, strategy, medicine, and techniques relating to karate. For those who don’t know about Bubishi, it is the ‘bible of karate’ and created by the famous master Chojun Miyagi. For hundreds of years, Bubishi has remained a secret text. It was then passed to students from their masters in China and later in Okinawa.

The essence of Bubishi book is that all karate’s legendary masters have studied it, and implemented its teachings. No other quality martial arts book provides this much in-depth knowledge or impacted dramatically on reshaping and development of karate as the Bubishi manual does.

In this Kung Fu book you will learn about the training methods of 72 Arts of Shaolin by Jin Jing Zhong. The book is perfect for all Kung Fu enthusiasts who would like to learn about the history of Kung fu. The book on Kung Fu is an old one, dated as back as 1934. It was written by the abbot of the Shaolin Monastery Reverend Miao Xing nicknamed “Golden Arhat”. He was one of the best Shaolin fighters of all times. The book describes 72 Shaolin Arts with full training methods. There are some secrets part of training of Shaolin monks available for those who would like to embrace this deadly yet graceful art of living.

List of Best Kung Fu books to learn at home

Want to stay fit and learn martial arts at home? Here is a list of Best Kung Fu books to start training.

The book includes over 100 step-by-step photographs so that people can easily learn the kung fu art. In this book you will learn about the art of meditation and techniques and how you can use these to overcome strength.

All people who are young can learn kung fu to make themselves powerful against oppressors.

The book is written by a 34th generation Shaolin Monk, Yan Ming, who says that there isn’t a better training program than his teaching method. Yan Ming is one of the most reputed Kung Fu teachers and has been teaching for years.

By his teaching you can become a master in aerobic workout  while increasing your flexibility, power, and speed.

Readers who stick to the plan for 28 days even for 10 minutes a day will find a transformed inside and out body.  The Shaolin workout is best in case when you want to learn fundamentals of Kung Fu.

Book Transform your body by The Shaolin Workout

This Art of Shaolin Kung Fu martial arts guide is written by a prominent Grandmaster who possesses a complete and comprehensive Shaolin wisdom.  It comes with step by step tutorials and with pictures of each step.

You will find yourself immersed in the ancient art of the Shaolin monks from a prominent Shaolin monastery. It will prove invaluable to everyone interested in martial arts, as the self-defence book focuses on chi kung, and meditation, Kung Fu and similar other Shaolin art forms to bring health, vitality, spiritual joy and mental focus.

Learn as a beginner from the Kung Fu masters in this great book. This is a great book for anyone who would want to improve his martial arts moves. The book will improve your techniques while taking you from the basics of ASIAN hand combat to historical developments and then to learning Shaolin Taijiquan.

Shaolin Kung Fu is one of the best martial arts sports. This book is inspiring for anyone who wants to learn more about Shaolin warrior art form but is restricted due to the lack of qualified instructors available for this sports in there area.

Kung fu is just one of the branches of Shaolin, other two being chi kung and Zen. This book is about all three.

You will get to learn the scope and depth of this amazing book in an easy to understand language. Some things that we have focused on include:

Buy The Complete Book of Shaolin

That’s everything you need to know about the Best Books to Learn Kung Fu. We will be adding more books to our list so stay tuned for more. Elliptical Trainers vs Treadmills for Weight Loss: What to Choose?