Schiek is a supporting strength company established in the United States that produces a variety of belts, straps, wraps, and other items. The majority of Schiek’s equipment is made in the United States, and the company boasts that every product was designed in response to customer and dealer requests. Both serious strength athletes and leisure lifters can benefit from their equipment.

The shape in which Schiek’s belts are created sets them apart from others on the market. The majority of belts are cylinder-shaped or uniformly wide all the way around. The sides of Schiek belts are contoured because they are cone-shaped. I was eager to test how the Schiek 2004 Lifting Belt affected my lifts when we received it.

Back squats, deadlifts, overhead presses, and power cleans were among the exercises I did to put this belt to the test. Read more from my side on Schiek 2004 Lifting Belt review!

The component of this belt that I was most interested in was its stability during each lift. I was wondered if the fact that it was shaped like a cone had any bearing on how it hugged and supported the body. The cone-shaped belt differs from the normal cylinder-shaped belt in a few ways. In addition to the extra width, the front of the belt includes double velcro, which means there is a strip on the inside of the belt in addition to the usual strap. Schiek’s one-way Velcro® invention is patented.

I loved the thicker front that the cone shape provides for stability. There is also a tapered back section that matches the back’s natural curve. I performed some heavier overhead presses to test these fundamental design differences, bracing my abdomen into the belt and feeling the tapering curvature.

One of my favorite aspects of this belt was its coziness. The cone form and how it felt across the sides of my body were both appealing to me. This feature may be a turnoff for people who like a wider, more rigid belt, but the cone form provided excellent comfort. With these curved sides, there was never a problem with the belt pressing into my ribs. I particularly loved how each side has a softer layer of cloth at the top and bottom to cushion the ribs even more.

A thicker strap wraps around the entire belt and adds a layer of security. A thicker lumbar pad can be seen in the back. The natural curvature of the belt felt robust while being comfortable as a result. I enjoyed how this pad wrapped across my back, especially when I was lifting with any kind of arch. The inner portion was soft, however, the top and bottom border was a touch irritating to the skin.

The Model 2004 Lifting Belt by Schiek is constructed of cotton and nylon with a lumbar insert. An enclosed material runs around the top and bottom edges, giving it a softer feel on the ribs and torso but not on bare flesh. I felt the enclosed edges were a wonderful touch because some strength athletes do not like the feeling of a belt pushing into their ribs. The cushioning in the belt is stiffer than that found in most standard nylon and fabric belts.

The buckle is made of stainless steel and features a plastic bar that wraps around the strap and pulls it tight. 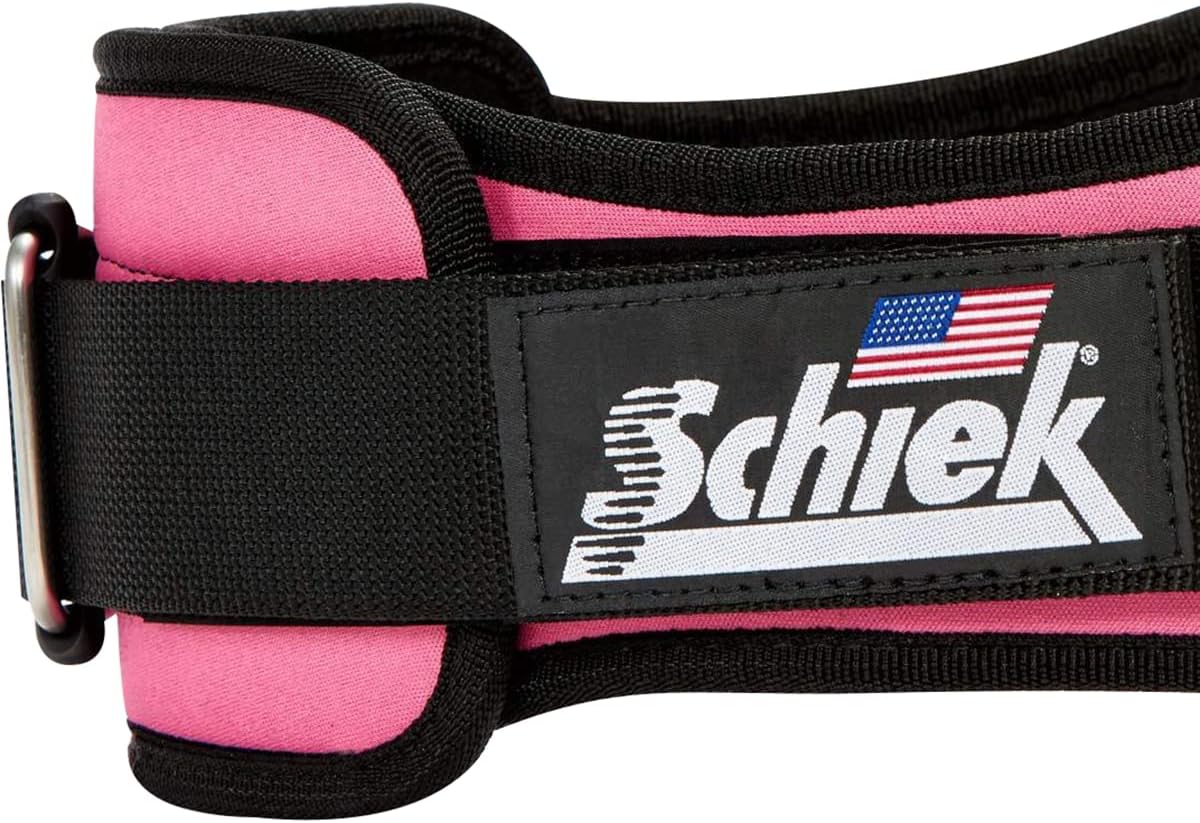 I enjoyed how the firm and soft portions were balanced. The lumbar insert is strong and does not appear to be easily degraded. There is also double velcro, so if one area of the velcro begins to fray, there is another layer of protection. In comparison to single-strap nylon belts, though, I could see this being a problem. The interior velcro is not as strong as the outer velcro. As a result of the high sweat and possibly chalk/dirt, I am concerned that this velcro will wear out rapidly.

I was undecided about the belt’s price, which starts at $49.95. This could be a fantastic match for a lifter who wants a belt that fits uniquely and provides additional abdominal support. A lifter who only requires a basic nylon belt, on the other hand, may be put off by the price. 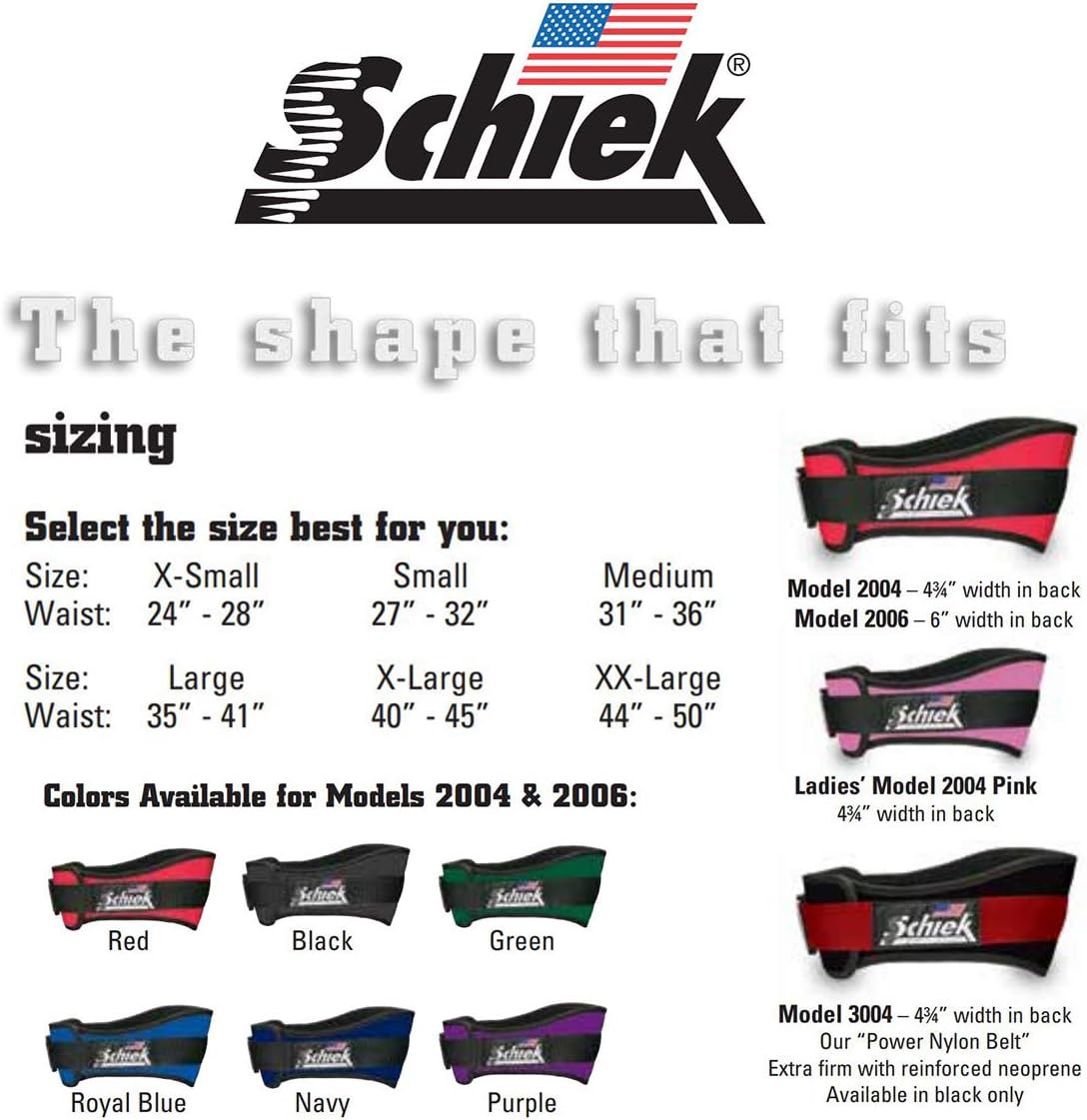 The Schiek 2004 Lifting Belt fell into the unusual category of belts I have tried. I liked how the one-way velcro hugged my stomach. The lumbar insert with the natural curvature of the posterior half of the belt was also appealing to me. Depending on your needs and wishes from a belt, the price was something that might be justified. There were several concerns about durability and the ease with which the tension could be adjusted during WODs.

Overall, I found this belt to be a good mix of stiff and soft for a range of movements. My Schiek 2004 Lifting Belt review.