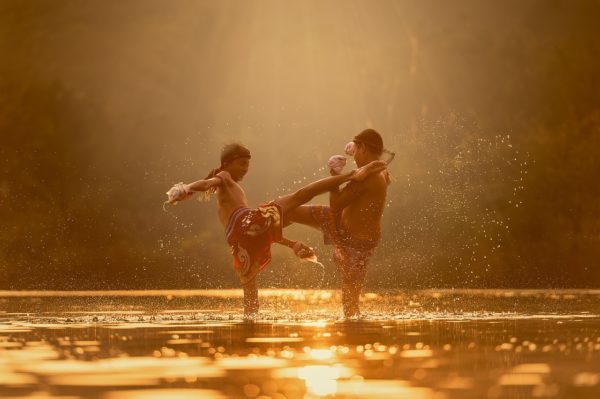 You might be wondering why measuring ‘Reach’ is significant in UFC (MMA) or boxing. All fighters like Chuck Lidell, Matt Hughes, and Georges St-Pierre have experienced this unique metric, ‘reach’ in the past to evaluate the impact of the fight. Reach is one of the metrics required to measure the outcome of the fight.

Let’s understand how to measure ‘Reach’ in UFC, MMA, Boxing.

How reach of arm length is measured in UFC and MMA. Source: Combat Museum

Generally, there are two types of reach. Arm span and arm length. Arm span or wingspan depends on the fighter’s height and shoulder width. Some fighters such as Joe Jones have a longer reach over 84.5 inches with a height of 76.5 inches while most of them might have a shorter reach.

Arm length is a different metric that is measured from the end of the fist to the armpit. Both the arm span and arm length are listed in the tale of the tape. However, the arm length is more consistent and difficult to manipulate.

During the tale of the tape, a fighter’s reach might differ as it can be manipulated by moving the posture of the shoulders i.e. putting them across the back in an inward position. However, there’s another measurement ‘arms-length’ which can be perceived as reach.

You may have found that many fighter’s reach changes from fight to fight. During measurement they can manipulate the checkers by tightening or moving the shoulders inwards across the back, reducing the measurement.

Most fighters use this tactic to confuse their opponents when they are preparing for a fight. However, in reality the reach in itself has no impact on the fighting ability of the player. Why do we measure Reach in UFC?

Before a fight begins, all the metrics are measured to evaluate the possible outcome of victory. It is believed that the fighters with a longer reach can maintain better distance while fighters with a shorter reach can land more punches to get inside and close the distance. For example, Muhammad Ali, the world’s renowned fighter, always kept his distance while demonstrating great footwork during a fight.

Whether it’s a longer reach or a shorter one, both styles are vital considering they have their pros and cons. However, landing and dodging punches while keeping or closing the distance is impressive. Therefore, the impact might depend more on the circumstances of the fighters and their willingness to win.

Benefits of Measuring Reach in UFC

Here are some benefits why it is official to measure the reach of a fighter in a UFC match.

There are many reasons for measuring reach but the best ones are:

We are now familiar with how a longer reach can help fighters get an edge in the game. Not only a longer reach is helpful but it is essential to understand how to measure a reach properly so that a fighter can be put in the right fighting segment.

The measure of ‘Reach’ can put a huge influence in UFC and boxing. It gives a benefit of doubt to the fighters during a tough fight. However, it doesn’t guarantee victory.

There are other metrics and skills in a fighter’s profile that are developed over time through years of training. Therefore, having a better reach is certainly beneficial but it can’t surpass the two necessary components i.e. skills and training.

“I look at obstacles as opportunities.” – Jon Jones Horizon T91 Treadmill Review – Is it Worth It?